Those who are new usually often rush to buy the first telescope they see in a departmental store, this is rightly understandable. All nice pictures of celestial bodies seen in magazines or in books have this effect on majority of the people.

Unfortunately, the experience usually turns out to be different from what was assumed earlier; all the magic is gone after setting the telescope in the backyard and after taking the first look at the night sky. The narrow field of view and confusing image orientation of the instrument soon cause more frustration than fun. 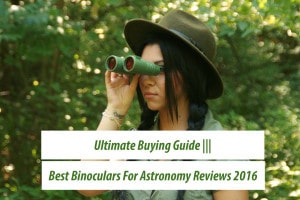 Here the obvious alternative is to go for a binoculars, which has the advantages of being relatively inexpensive, easy to use and highly portable. The only disadvantage being that the magnification is generally fixed. Zoom models with varied magnification are also available, but it is probably better to accept the fixed-power limitation, the reasons for this you will later find out in this article.

Binoculars with a magnification of 5 to 8 times are ideal for finding the planets, viewing bright comets, studying star clusters such as Pleiades and Hyades and scanning Milky Way star fields. The moon will become a constant source of enjoyment; the mountains, valleys and craters are brought out in their beauty, and to learn the most prominent features takes only a few minutes.

Knowing a little about telescopes first will help you understand the working principle of binoculars. Binoculars are actually two identical telescopes placed next to each other.

Each telescope has a lens at the front of it, called the objective. The role of the lens is to gather light from whatever it is you are looking and bring it to a focus in the eyepiece, where the light is formed into a visible image of the eyepiece, and for binoculars the magnification is usually 5x and 10x.

The image produced by this telescope will be upside down and backwards, but this is not a major inconvenience for astronomical viewing. There is nothing like up and down or left and right in space. However a right-side-up picture is essential for bird watching or following the action at a baseball game. This is why binoculars are designed with corrective elements called prisms between the objective lens and the eyepiece.

Prisms in binoculars are blocks of glass that function as mirrors, but without the reflective backing of a mirror. They use different types of glass and come in two models; this we will discuss later.  Let’s just mention their role for now, which is to bring the light beams from the objective closer together by the means of internal reflection, and also turn the image right-side-up and orient the view properly from left to right.

For a better understanding of the working principle. The light enters the objectives, passes through a set of prisms that turn the image right-side-up, and finally leaves the eyepiece to enter the observer’s eyes. This is applicable to all binoculars irrespective of the model or size.

The Best South American Hikes
How To Use Binoculars For Night Sky Observing
Why Two Way Radios Are Beneficial When hunting
5 Tips On How To Mount A Rifle Scope
Which Binocular Magnification Is Better (8x Or 10x)?
Productive Activities To Do In Quarantine
Top Snake Proof Boot Brands
10 Best Range Bag Reviews For 2021
How To Pack Your Range Bag?
What Is MOA And How To Use It?